I'm a journalism guy, but I firmly believe we should go out of our way to not be the story. It was pounded into me in j-school, it was pounded into me by my first editor at a small but really good Mississippi daily newspaper. I still believe it, I still preach it. Yes, there are exceptions, but our audience wants to know about the story, not about us. Plus it makes us look like snowflakes. 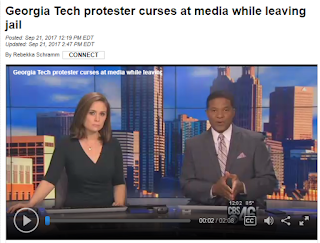 So we have this Atlanta TV station story about the bonding out of three students who protested the Georgia Tech police shooting of a troubled student. Watch the video yourself. I don't think the hed on the web site seen to the left about protester curses the media is really the story here. It's a basic making bail story, the kind we do all the time, but him tossing a few expletives in a journalist's direction is hardly news. Jeez, if I made a story about every time I'd been cursed at as a reporter I'd never have time for real news.

Watch the story, decide for yourself if this is the hed that really deserves to be on there. I suppose it is clickbaity because, face it, we all love seeing those damn journalists getting cursed at. But I'm not a clickbaity guy.

As political junkies know, there's a fascinating U.S. Senate race going on next door in Alabama between Roy "Ten Commandments Everywhere" Moore and Luther "Trump Likes Me Best" Moore. The election itself is Sept. 26, but there's been a spate of polls showing either Moore winning big or the race a statistical tie. No polls seem to show Strange ahead. This bodes well for Moore and, of course, poorly for Strange.

A poll out today suggests the race is tightening. Here's the opening grafs. Keep in mind that tightening in this case still has Moore thumping Strange.


U.S. Sen. Luther Strange has made significant cuts into Roy Moore's lead in a Republican primary runoff poll but still has a lot of ground to make up over the next eight days.

The same polling firm last month had Moore with a 19-point lead.

It's helpful when the same firm, using the same method, shows change. It's more difficult to compare across polls, especially when they use very different sampling or weighting methods, and that assumes they report any of these details at all.

A few days earlier a different poll essentially said it's too close to call. Keep in mind this particular poll has ties to those supporting Strange, but I'm certain it's a mere coincidence they call it a tie.

A summary of polls by Real Clear Politics paints a pretty picture for Moore.

President Donald Trump and the GOP establishment have all endorsed Strange, as Moore infamous for his on-again, off-again career on the state supreme court. In this case, Trump's endorsement doesn't seem to matter.

Maybe it will tighten some before the election. That's what usually happens in most races as undecideds, well, decide. Those may break more for Strange but it's hard to imagine enough of them remain out there to change the outcome.


Posted by Hollander at 1:36 PM No comments:

I wrote yesterday about the incoming UGA freshman class and the most popular first names. This is Part II in which I provide the data of the top five names since 2008. See the table below. A few years have ties for a spot.

As you can see, for a long time Emily and Sarah dominated and even in 2017 they're in the top five, but William stepped up. Why is that? Good question, as UGA tends to have more female than male students. Keep in mind the differences in raw numbers are slight. See below for the top five in 2017 and the numbers of students who share that first name.

Think about those numbers above, as they're out of 5,482 or so freshman in this year's class. So all it takes is a statistical quirk of a few more students who share a name to bump it up the list. You really can't make too much out of this, though that doesn't stop me from trying every year, just for fun.

Posted by Hollander at 4:27 PM No comments:

Every year since 2008 I've collected the first names of UGA's freshman class and have then written about it. Why? I have too much time on my hands, that's one. Two, it's a fun exercise to show students, to demonstrate you can find story ideas in odd places. 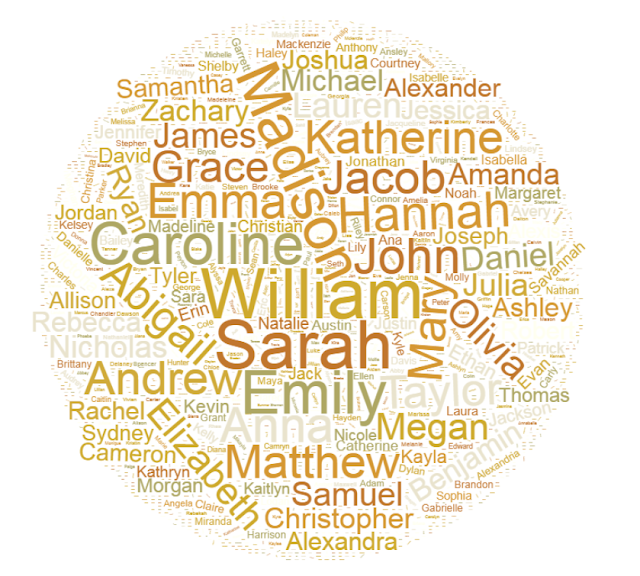 To really have fun with this, I'd need to dip into the Social Security baby name data for the year these students were likely born, see if there was a burst nationally or even in Georgia of kids named Madison compared to earlier years. I can say, based on a cursory look, William was the most popular boy name in Georgia in 1999, roughly when these students were born, and Madison was the 4th most popular name. If we go back 10 years, Madison is the #1 Georgia girl's name, so I can't really explain the boomlet in Madison at UGA. It will take some more data digging.

Posted by Hollander at 10:31 AM No comments:

The Dawgs play the Irish this Saturday. Notre Dame is a hair under a touchdown favorite, last I looked. So how else do the schools match up? We'll hear or read sportspouters saying this is a clash of traditions and so on, but is it really?

Movies Made About the Football Team

It gets messy, those earlier "championships"
-----

Notre Dame: most selective
UGA: more selective (most is higher than more)
-----

Tuition and Fees (by one site)

Posted by Hollander at 10:06 AM No comments:

Red and Black, you'd immediately answer, probably with a sneer or at least a rolling of the eyes at a journalism professor incapable of remembering such a basic school factoid or at least the name of the student newspaper. But you see, there's red, and then there's red. According to one site that compiles all the school colors from around the country, UGA's red is technically #DA291C (if you're fluent in the good old hex color chart). That's fine except the UGA marketing folks insist on this official page that it's #BA0C2F. The UGA version of the code is a tad darker and richer than the one offered by the site that compiles all team colors. Below I provide them again on bold face to emphasize the differences.

So you can see, in some browsers, it's kinda obvious. Oh, and Alabama's "crimson" is slightly different at #990000, which is actually quite a generic red. I thought they'd tweak it a bit, but apparently not.

Just think of the fun we can have distinguishing among the various oranges of Auburn, Tennessee, etc. OK, it's not that much fun, about as much fun as watching Fun with Flags, so I'm not gonna do it.